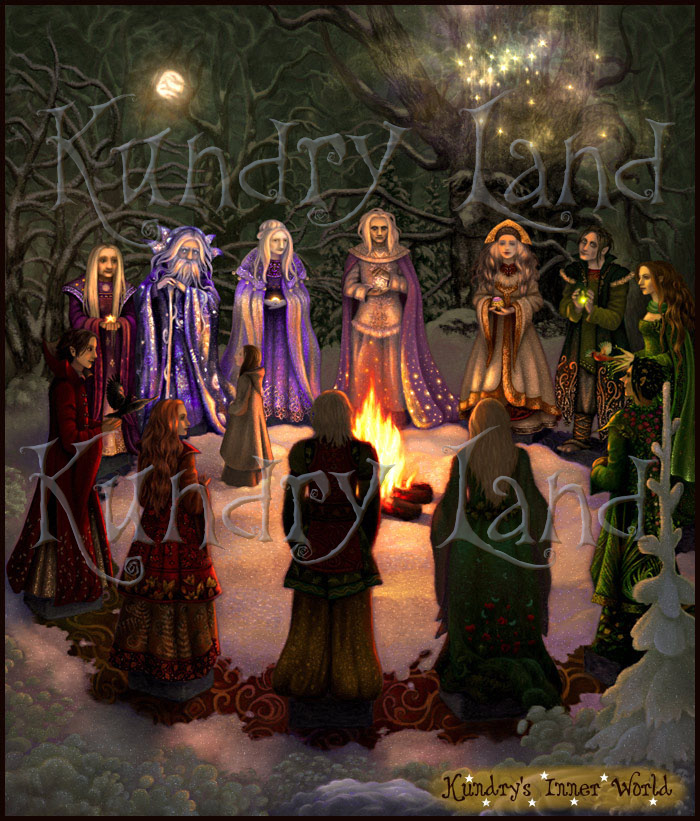 That was fun to make but also terribly long. I enjoyed personalising the months, it was a very interesting exercise to get a “feel” for each. When I see this painting now, I can’t help hearing what I was listening to continuously at the time of painting:

THERE was once a widow who had two daughters, Helen, her own child by her dead husband, and Marouckla, his daughter by his first wife. She loved Helen, but hated the poor orphan because she was far prettier than her own daughter.

Marouckla did not think about her good looks, and could not understand why her stepmother should be angry at the sight of her. The hardest work fell to her share. She cleaned out the rooms, cooked, washed, sewed, spun, wove, brought in the hay, milked the cow, and all this without any help.

Helen, meanwhile, did nothing but dress herself in her best clothes and go to one amusement after another.

But Marouckla never complained. She bore the scoldings and bad temper of mother and sister with a smile on her lips, and the patience of a lamb. But this angelic behavior did not soften them. They became even more tyrannical and grumpy, for Marouckla grew daily more beautiful, while Helen’s ugliness increased. So the stepmother determined to get rid of Marouckla, for she knew that while she remained, her own daughter would have no suitors. Hunger, every kind of privation, abuse, every means was used to make the girl’s life miserable. But in spite of it all Marouckla grew ever sweeter and more charming.

One day in the middle of winter Helen wanted some wood-violets.

“Listen,” cried she to Marouckla, “you must go up the mountain and find me violets. I want some to put in my gown. They must be fresh and sweet-scented-do you hear?”

“But, my dear sister, whoever heard of violets blooming in the snow?” said the poor orphan.

“You wretched creature! Do you dare to disobey me?” said Helen. “Not another word. Off with you! If you do not bring me some violets from the mountain forest I will kill you.”

The stepmother also added her threats to those of Helen, and with vigorous blows they pushed Marouckla outside and shut the door upon her. The weeping girl made her way to the mountain. The snow lay deep, and there was no trace of any human being. Long she wandered hither and thither, and lost herself in the wood. She was hungry, and shivered with cold, and prayed to die.

Suddenly she saw a light in the distance, and climbed toward it till she reached the top of the mountain. Upon the highest peak burned a large fire, surrounded by twelve blocks of stone on which sat twelve strange beings. Of these the first three had white hair, three were not quite so old, three were young and handsome, and the rest still younger.

There they all sat silently looking at the fire. They were the Twelve Months of the Year. The great January was placed higher than the others. His hair and mustache were white as snow, and in his hand he held a wand. At first Marouckla was afraid, but after a while her courage returned, and drawing near, she said: —

“Men of God, may I warm myself at your fire? I am chilled by the winter cold.”

The great January raised his head and answered:
“What brings thee here, my daughter? What dost thou seek?”

“I am looking for violets,” replied the maiden.

“This is not the season for violets. Dost thou not see the snow everywhere?” said January.

“I know well, but my sister Helen and my stepmother have ordered me to bring them violets from your mountain. If I return without them they will kill me. I pray you, good shepherds, tell me where they may be found.”

Here the great January arose and went over to the youngest of the Months, and, placing his wand in his hand, said: —

“Brother March, do thou take the highest place.”

March obeyed, at the same time waving his wand over the fire. Immediately the flames rose toward the sky, the snow began to melt and the trees and shrubs to bud. The grass became green, and from between its blades peeped the pale primrose. It was spring, and the meadows were blue with violets.

Joyfully she hastened to pick the flowers, and having soon a large bunch she thanked them and ran home. Helen and the stepmother were amazed at the sight of the flowers, the scent of which filled the house.

“Where did you find them?” asked Helen.

“Under the trees on the mountain-side,” said Marouckla.

Helen kept the flowers for herself and her mother. She did not even thank her stepsister for the trouble she had taken. The next day she desired Marouckla to fetch her strawberries.

“Run,” said she, “and fetch me strawberries from the mountain. They must be very sweet and ripe.”

“But whoever heard of strawberries ripening in the snow?” exclaimed Marouckla.

“Hold your tongue, worm; don’t answer me. If I don’t have my strawberries I will kill you,” said Helen.

Then the stepmother pushed Marouckla into the yard and bolted the door. The unhappy girl made her way toward the mountain and to the large fire round which sat the Twelve Months. The great January occupied the highest place.

“Men of God, may I warm myself at your fire? The winter cold chills me,” said she, drawing near.

The great January raised his head and asked: “Why comest thou here? What dost thou seek?”

“I am looking for strawberries,” said she.

“We are in the midst of winter,” replied January, “strawberries do not grow in the snow.”

“I know,” said the girl sadly, “but my sister and stepmother have ordered me to bring them strawberries. If I do not they will kill me. Pray, good shepherds, tell me where to find them.”

The great January arose, crossed over to the Month opposite him, and putting the wand in his hand, said: “Brother June, do thou take the highest place.”

June obeyed, and as he waved his wand over the fire the flames leaped toward the sky. Instantly the snow melted, the earth was covered with verdure, trees were clothed with leaves, birds began to sing, and various flowers blossomed in the forest. It was summer. Under the bushes masses of star-shaped flowers changed into ripening strawberries, and instantly they covered the glade, making it look like a sea of blood.

Joyfully she thanked the Months, and having filled her apron ran happily home.

Helen and her mother wondered at seeing the strawberries, which filled the house with their delicious fragrance.

“Wherever did you find them?” asked Helen crossly.

“Right up among the mountains. Those from under the beech trees are not bad,” answered Marouckla.

Helen gave a few to her mother and ate the rest herself. Not one did she offer to her stepsister. Being tired of strawberries, on the third day she took a fancy for some fresh, red apples.

“Run, Marouckla,” said she, “and fetch me fresh, red apples from the mountain.”

“Apples in winter, sister? Why, the trees have neither leaves nor fruit!”

“Idle thing, go this minute,” said Helen; “unless you bring back apples we will kill you.”

As before, the stepmother seized her roughly and turned her out of the house. The poor girl went weeping up the mountain, across the deep snow, and on toward the fire round which were the Twelve Months. Motionless they sat there, and on the highest stone was the great January.

“Men of God, may I warm myself at your fire? The winter cold chills me,” said she, drawing near.

The great January raised his head. “Why comest thou here? What does thou seek?” asked he.

“I am come to look for red apples,” replied Marouckla.

“But this is winter, and not the season for red apples,” observed the great January.

“I know,” answered the girl, “but my sister and stepmother sent me to fetch red apples from the mountain. If I return without them they will kill me.”

Thereupon the great January arose and went over to one of the elderly Months, to whom he handed the wand saying: —

“Brother September, do thou take the highest place.”

September moved to the highest stone, and waved his wand over the fire. There was a flare of red flames, the snow disappeared, but the fading leaves which trembled on the trees were sent by a cold northeast wind in yellow masses to the glade. Only a few flowers of autumn were visible. At first Marouckla looked in vain for red apples. Then she espied a tree which grew at a great height, and from the branches of this hung the bright, red fruit. September ordered her to gather some quickly. The girl was delighted and shook the tree. First one apple fell, then another.

Thanking the Months she returned joyfully. Helen and the stepmother wondered at seeing the fruit.

“Where did you gather them?” asked the stepsister.

“There are more on the mountain-top,” answered Marouckla.

“Then, why did you not bring more?” said Helen angrily. “You must have eaten them on your way back, you wicked girl.”

“No, dear sister, I have not even tasted them,” said Marouckla. “I shook the tree twice. One apple fell each time. Some shepherds would not allow me to shake it again, but told me to return home.”

“Listen, mother,” said Helen. “Give me my cloak. I will fetch some more apples myself. I shall be able to find the mountain and the tree. The shepherds may cry `Stop!’ but I will not leave go till I have shaken down all the apples.”

In spite of her mother’s advice she wrapped herself in her pelisse, put on a warm hood, and took the road to the mountain. Snow covered everything. Helen lost herself and wandered hither and thither. After a while she saw a light above her, and, following in its direction, reached the mountain-top.

There was the flaming fire, the twelve blocks of stone, and the Twelve Months. At first she was frightened and hesitated; then she came nearer and warmed her hands. She did not ask permission, nor did she speak one polite word.

“I am not obliged to tell you, old graybeard. What business is it of yours?” she replied disdainfully, turning her back on the fire and going toward the forest.

The great January frowned, and waved his wand over his head. Instantly the sky became covered with clouds, the fire went down, snow fell in large flakes, an icy wind howled round the mountain. Amid the fury of the storm Helen stumbled about. The pelisse failed to warm her benumbed limbs.

The mother kept on waiting for her. She looked from the window, she watched from the doorstep, but her daughter came not. The hours passed slowly, but Helen did not return.

“Can it be that the apples have charmed her from her home?” thought the mother. Then she clad herself in hood and pelisse, and went in search of her daughter. Snow fell in huge masses. It covered all things. For long she wandered hither and thither, the icy northeast wind whistled in the mountain, but no voice answered her cries.

Day after day Marouckla worked, and prayed, and waited, but neither stepmother nor sister returned. They had been frozen to death on the mountain.

The inheritance of a small house, a field, and a cow fell to Marouckla. In course of time an honest farmer came to share them with her, and their lives were happy and peaceful.