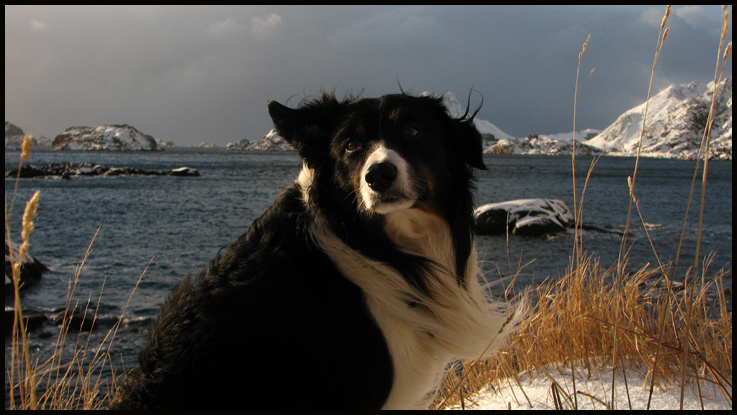 I had decided I wouldn’t get up today and just slip into the merciful oblivion of sleep, but in between waking up in pools of my own tears, I started to write in my head, bits here and there. And finally decided to get up in order to write “for real”.

Loki passed away yesterday and the pain is just so raw, so unbearable. We had decided that we would give him the merciful death when he began suffering. Yesterday he lost control of his legs, and to see him so intent on getting up despite the pain was too much to bear. Lately, he had deteriorated and it was really weighing on my heart. He was eating less, got more into the “drunk” behaviour, it was becoming increasingly difficult to keep him clean. He would wake me up almost every hour in the night so that he could go out and do his business, but we had to keep an eye on him at all times, he would easily get stuck in a corner, unable to back up. Who can say if it still counts as “quality of life” or not? We don’t put down disabled people and Loki hung on to dear life in spite of all the discomfort (but no pain). So, we hoped with him for an improvement. We took the risk. And he had to go through all this misery, him more than us of course. We took the risk. And we lost. 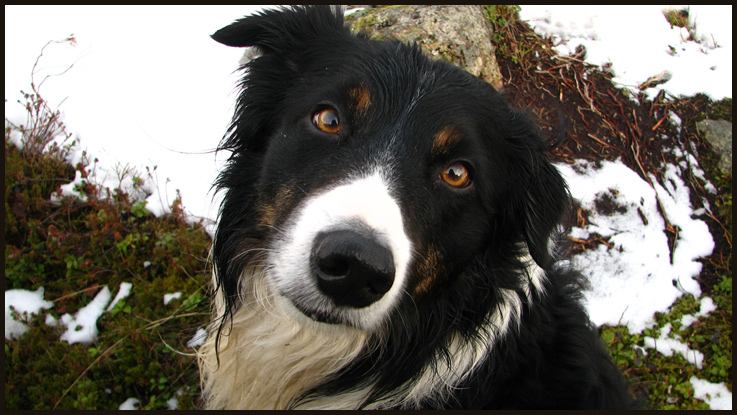 But this is not how I want to remember Loki and certainly this is not the way he wants to be remembered, either. Loki always knew when I was thinking of him. He would come to me or, if he was walking in front of me, he would sense my adoring gaze and start licking his lips as if for a special treat. He didn’t know why suddenly he was a “good boy”, but he was probably tempted to attribute this to his good looks. And how gorgeous he was, my darling dog. Through the years, I called him “mon chéri”, “mon trésor”, “canard”, “petit père” and quite puzzlingly for non-French speakers “ma petite puce” which means “my little flea”. But my companion was most inventive, he called him “Lokimus”, “Lokimouse”, “Pants”, “Mister Pants”, “Pants Head”, “Molecule”, “Pokey”, “Polecule”, “Poquito”, “Moki”, “Loki Boy”. His coat was luxuriant, especially the jabot of long white hair he proudly bore on his chest, which made him look like a dignified baron. Every move of his was was pure natural elegance. And he was amazingly flexible. I know border collies are, but he really dumbfounded me the day he went through a fence whose holes were 25×25 cm. He was very rarely tired. I took him on walks everyday, in all kind of weather, for never less than 1 hour and a half, and on top of that there’d be half-an-hour of just running after the ball, and even that was not enough. Actually, even after a three hour walk, he’d dare to ask for more. He remained young for 12 years. He was very lucky to be so amazingly fit for so long. He got to be young for much, much longer than the average dog. It’s probably also why it was so hard to see him stop playing and running. And quite abruptly. One day, he just stopped and that’s when I knew he was severely affected. Not just getting old. He didn’t get the time to get old, he just got sick. 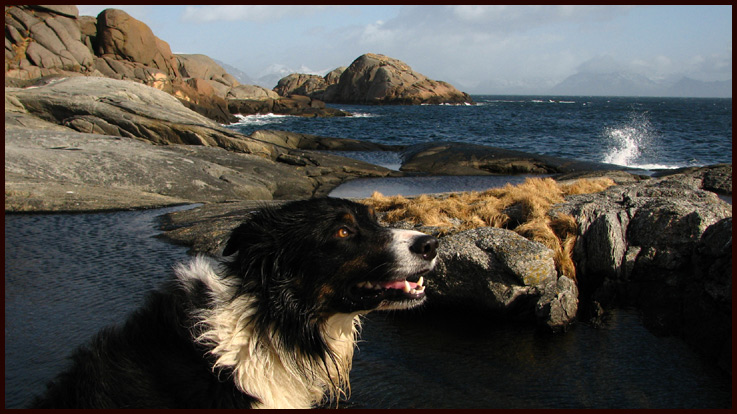 He was 13 years old and he was born on a 4th of July, when all the meadows on the Lofoten islands are just endless waves of pink, white and yellow flowers. He came from a farm where the mother lived in a doghouse in the garden. She was a working sheep dog and her name was Tina. Loki was the only puppy who had ochre eyebrows, but it was very difficult to choose among the three males. We didn’t know that the owners wouldn’t find homes for the two remaining ones and would dispose of them. We were very sad when we learned this. After two months, it was time to go back to the farm to collect Loki, but I had to change tone when the family pleaded to keep the puppy for a month longer “for the children”. I’m glad I stood my ground because when we finally went to get him, he was the only puppy who hid. He was very shy and, later on, we discovered he was very anxious around children. My theory is that children played with the puppies unsupervised and got too rough with them. This is probably why he became a very nervous dog, sometimes barking at his own shadow on the wall. He was also very sensitive to noise. On top of the usual fireworks, there was also the noise of sheets of snow falling from the roof which would make him rush in the middle of the night to the safest place in the house: my sleeping head. I can’t say I enjoyed waking up suffocated by a dog’s bottom, but I felt really sorry for him. Only last year did he calm down. Also because he had become deaf. 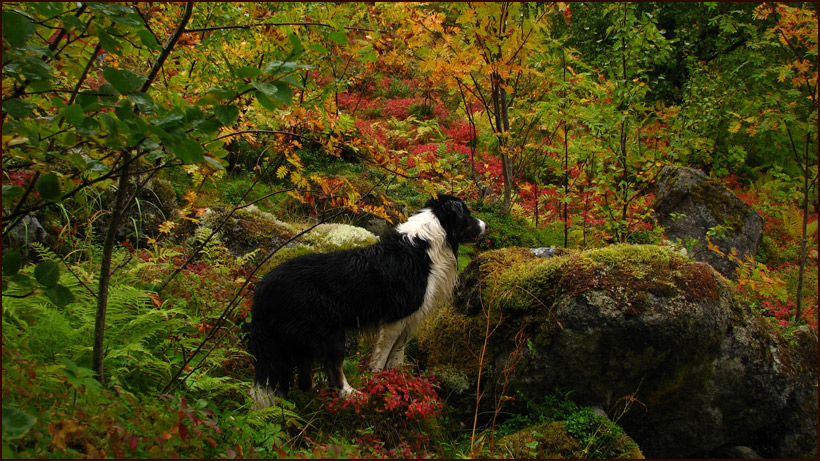 People around us thought he was a quiet dog, very well behaved, and were really amazed by his ability to walk without a leash along the side of the road without rushing into the wheels of passing cars. Actually, he loved racing with the cars, but from a safe distance. He was so funny when he went into a running frenzy and was very much convinced he could outrun the car. Drivers, when realising what his game was, often laughed. But he was not a bad loser, he loved the sheer joy of racing. He loved chasing seagulls as well. And oyster catchers. But whenever he was getting close to his prey, he would just stop. He was never interested in catching anything, except the ball, or the stick. That was part of his infinite sweetness. When he was little and I played with him like a puppy, he would sometimes be a bit too rough with his teeth and no amount of “NO!” would make him understand. Until one day, after he hurt my hand, I faked crying. He tilted his head, looking at me with big sorrowful eyes, and from that day on he was much gentler. 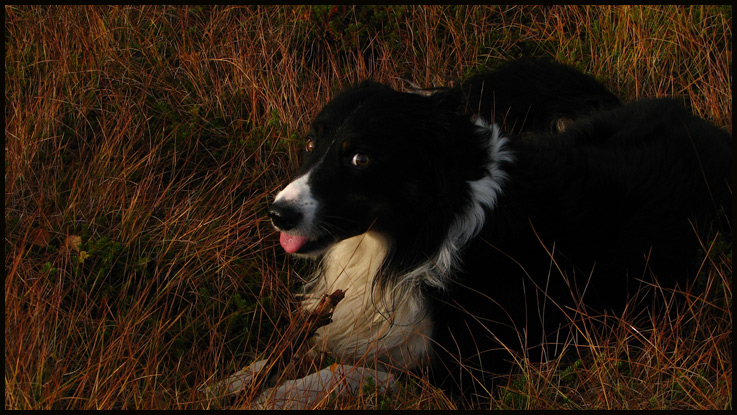 He was also a very serious dog, very obedient and responsible. It sometimes gave him a kind of austere look. He was not so much the clownish type of dog, but we still laughed at him sometimes (which he enjoyed because it was perceived as a sign of attention – and adoration). Some people would be a bit puzzled by his lack of jumping-all-over-the-place enthusiasm. If you gave him a treat, he took it very delicately with the tips of his lips. He was reserved. There was only one way for a stranger to make instant friends with him and that was to throw the ball. I remember once walking along a field where some big guys, as I noticed too late, were playing football. He rushed for the ball among the surprised players. Unfortunately, I was laughing too hard to be able to call him back at once. 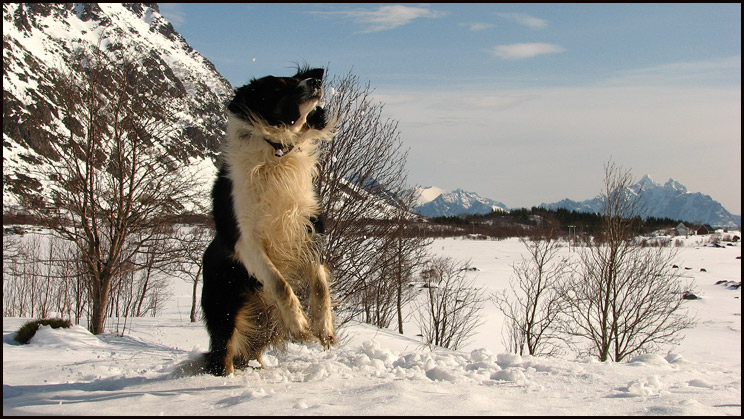 We went on some fabulous adventures in the wilderness, he and I. Most of the time never meeting anyone. The wilderness was our domain. For every picture you will see on this blog, there was this dog nearby. Sometimes right in front of the camera. Because from an early age, he had learnt to associate the camera with having to pause for me, he had perfected this art. Actually, often, as I wanted to take a nice shot of some beautiful foliage on the ground, he’d move out of habit into my field of vision, trampling the foliage. 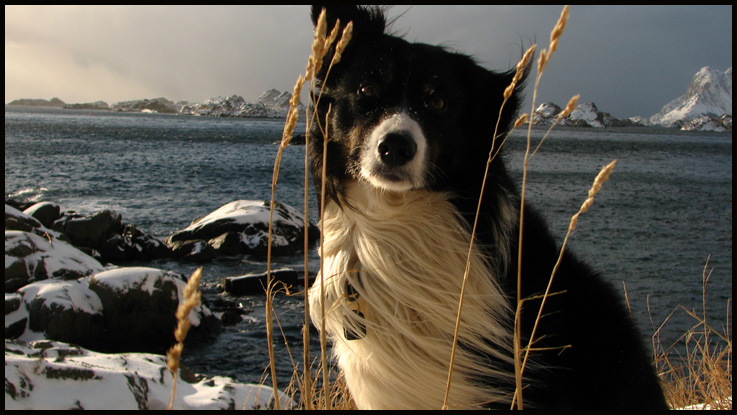 He loved bathing, but never went so deep that he had to swim. I’ve never seen him swim. But every surface of water we encountered, he had to break. It was a bit problematic if I wanted to take a shot of some mirroring lake for example. I had to rush for my camera before he got the chance to break the perfect reflection. 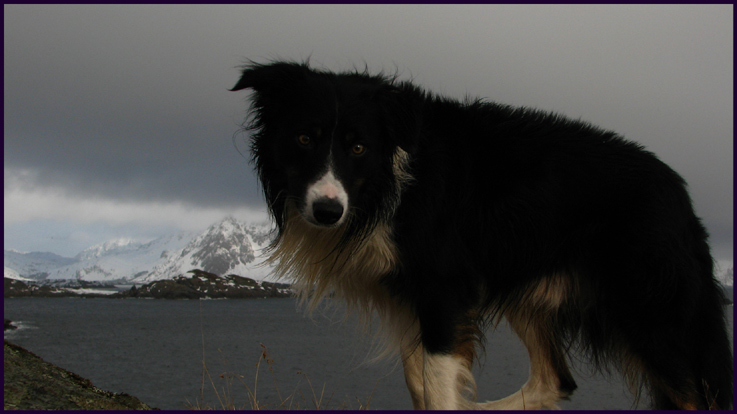 On some rough mountain sides, I sometimes had trouble going forward, he always stayed by my side to make sure I was all right. He did the same with my companion. But generally he was never far away. If he disappeared, he would come back no later than one minute. He trusted me and I trusted him.

He had a soft heart for little dogs and puppies. I trusted him entirely with them. He was patient and tolerant. But he was very afraid of German Shepherds because he had too many bad experiences.

He had only one lover. I searched for him an entire evening, he had followed her during our walk. She was… very old. The typical mama’s boy that he was. I wish he had more but we were never contacted by any potential breeder. Apparently, Loki’s father was lazy but Loki himself would have made a good shepherd. He herded his toys, gathering them in one place, herded us when going for walks in numbers, and occasionally herded some bemused sheep we encountered during our walks. 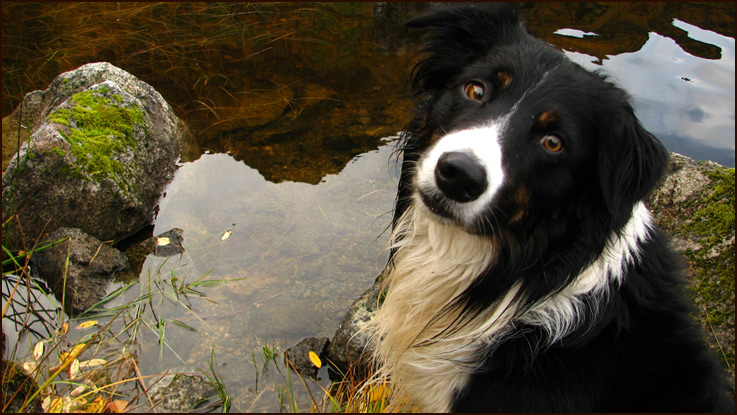 I miss him so, so much. The pain of his loss twists my heart in an unbearable way. It’s just too horrible. Although the frustration of not being able to interact with him in a physical way is maddening, I believe he’s still here. He discovered other paths which I won’t tread – yet- but he still lingers and watches us. He wants to be seen.

I see you, my darling dog, mon chien de féerie. 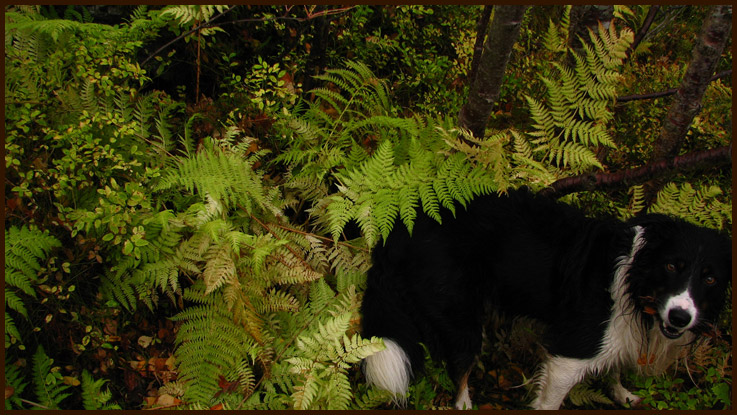